Two years ago. The day that we shall not forget. We demanded a genuine universal suffrage. We didn’t get it. We got violent repression. We experienced injustice. The day when the government threw tear gas bombs to the ‘armed protesters’ – armed with umbrellas. Umbrellas that people used to protect themselves from pepper sprays and tear gas bombs. Umbrellas that certain lawmakers said were offensive weapons, as we could see in Chinese fiction.

I was, and still am, so proud of all the Hongkongers who contructed the Admiralty Village, creating an area for students to study while occupying, decorating it with cartoon characters holding yellow umbrellas. Totally amazing and touching. And the Lennon Wall. I posted on the wall too. I could smile, because it was before the day that we shall not forget. 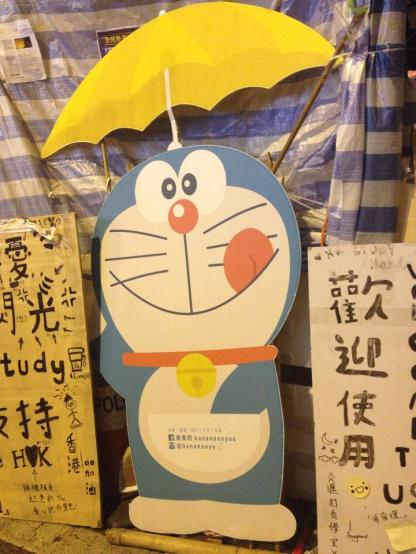 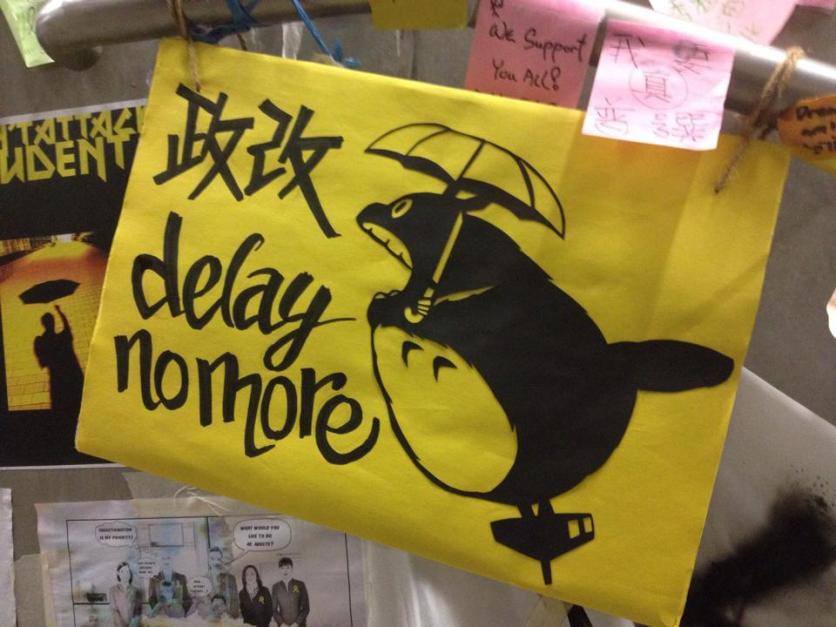 Apology for not putting any picutures of the night two years ago, as I don’t own any. Please visit here – a wonderful recap for all of us.

I wasn’t there. I was in front of my computer. And I had classes to teach the next day. I let my kids do listening exercise on some BBC reports on what happened.

I wrote two poems. Just so that I won’t forget. Orginially published in Cha the September 2014 issue.

‘Hong Kong is a paradise,’
says the English teacher.
The simple present tense indicates
it simply was,
it presently is,
and it will be…

We had a Governor known for
his love of authentic
Hong Kong-style egg tarts.
In the good year he left
but the handover promise is kept
and Hong Kong is still
a paradise, where an ICAC
Commissioner is addicted to
pricey Chinese wine.

The euphoric masses
after seventeen years still make
out of their pink cloud the cake
of fantastic prosperity
and a tea party
of ignorant frivolity, not remembering
the won ton noodles
devoured by golden bracelets and brandname handbags.
We wish to smile
without our heads, but this is
no Wonderland.

We imagine we were handling
Zhu Yuanzhang’s mooncakes, but there
are only unequally small
egg yolks embraced by greasy
lotus paste. There is no dragon inside
chain-store box-set mooncakes.
Hong Kong has no fortune cookies.

One day, they will take away
our egg tarts and milk tea.
But we will still have pineapple buns
made of gutter oil and
without pineapple.
‘Doesn’t matter,’ a sixty-four-year-old Papa
says, ‘we have survived
and will survive
for another fifty years.’

Hong Kong is a paradise
aloft
for dreamers.

now –
a period of silence
to offer condolence
but how many are thinking
of the quiz in the second lesson?

do map reading skills inform us
where the teary firework was displayed?
the alleged violence of the imaginary mob
was simply vertical exaggeration

could we possibly conclude the casualties
by solving a quadratic equation?
but nothing can stop the people from
flooding the land in geometric sequence

Just don’t forget. The beauty and resilience of Hongkongers.

So here I am in Glasgow, for the third day.

Established in 1451, University of Glasgow is the fourth oldest UK university. The architecture reflects its long history. The feeling of having classes in the small rooms in such buildings is always interesting. 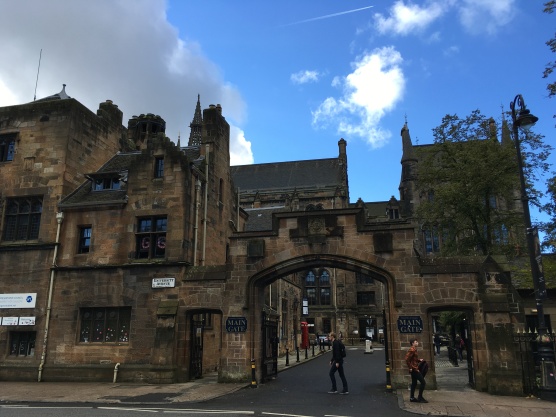 But there is also modern architecture. The two places I shall go often – the library and the School of Education. 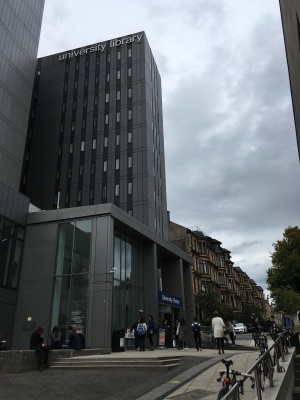 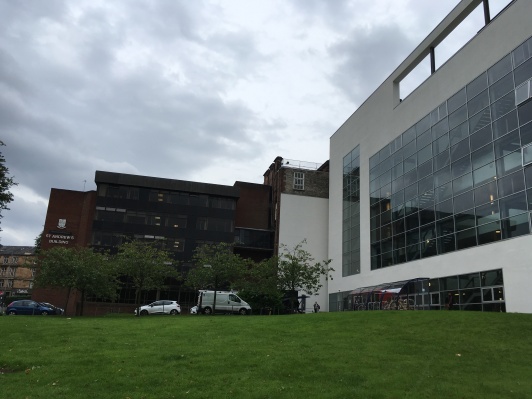 Walking into the busier areas of the city…

My friend recommended a coffee place and I’ve tried it – good quality coffee at a great price (as compared to what it would have cost in Hong Kong)! 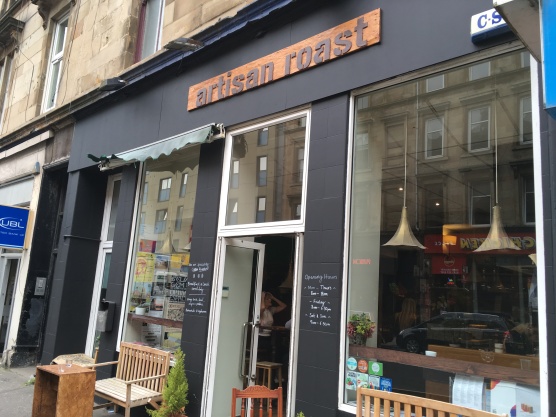 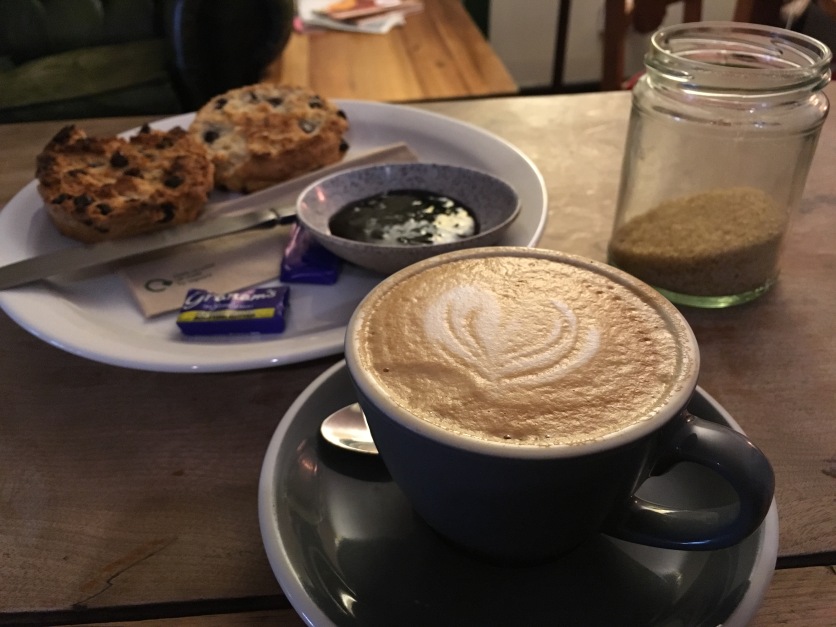 Most of you would be aware that in the world of texting, different generations have different habits. Older generations tend to write complete sentences (with conscious effort on making sure the grammar and punctuation are correct) while younger ones tend to be brief and lax about accuracy. Among the younger generations, we can even make distinctions by the Internet slang and shorthands they use.

In Hong Kong, there is a texting phenomenon called ‘elderly graphics’ (長輩圖). Their appearance is particularly frequent during festivals such as the Mid-autumn Festival, also known as the Mooncake Festival, that has just passed. Here’s an example:

They aren’t necessarily related to festivals, but most contain words of blessings, like this one: Correct me if I’m wrong, but this looks like a Chinese phenomenon and I haven’t seen, and can’t find, a western parallel.

While the use of such graphics is customary among the elderly when they text each other, younger generations usually find these pictures meaningless and annoying – when your aunt sends such a picture every morning. These pictures are often sent out of context (and in this sense the festival ones are better-received already) and you aren’t sure what to respond, except with an emoticon.

Typical elderly graphics consist of a flowery background (prototypically lotus flowers) – sometimes it can also be a buddha or any similar icons – and colourful words of WordArt style. Content is either blessing or proverbial teaching, ending with ‘Share if you agree’.

Netizens are quick to produce parody versions that contain nonsense or hilarious messages.


Some even spread political messages using the style of elderly graphics:

The main difference between the authentic elderly graphics and the parody ones – besides the difference in content – is the media of sharing. The authentic ones are shared via texting apps like Whatsapp for individual friends or friend groups, and that’s why I can’t indicate the source of the first two pictures. As for the parody ones, they are usually shared on social networking sites like Facebook, where the younger generations are active, for public display, for people to have a good laugh.

Anyone who believes in the value of academic research would consider academic ethics / honesty / integrity as something that cannot be compromised. The academia is a system, just like the legal system, whose credibility depends highly upon the integrity of the operators. Strict ethical codes and regulations are there to minimise possible corruption that would cause the ivory tower, or the court likewise, to collapse into rubble. In other words, they are to forestall academic dishonesty.

The most commonly mentioned kind of academic dishonesty is plagiarism – copying others’ ideas without acknowledgment, which is the same as stealing people’s intellectual property. Another kind of academic dishonesty is improper or unethical obtainment of data, for example, without the consent of participants, or deliberately obscuring the purpose of the project when obtaining data.

These are all ACAD 101. What attracts my attention here is how different academic institutions refer to this core value that we embrace: academic ethics? academic honesty? academic integrity?

Ethics
Some institutions prefer to use the term academic ethics. Ethics, commonly used to refer to moral principles, is a philosophically complex term. Forgive me for not being able to elaborate on this due to the lack of knowledge about moral philosophy, but this piece of news about an ethics professor might be something to think about. Unlike honesty and integrity, ethics has nothing to do with a person’s character. It’s in the action itself – we don’t call somebody unethical, but we would say an act is.

Honesty
In Hong Kong, a number of universities, including The Chinese University of Hong Kong where I studied, adopt the phrase academic honesty. Academic honesty, at the first glance, is the conspicuous opposite of academic dishonesty, the way most people term the sin in the academia. (I googled a bit and did find the rare use of the phrase ‘academic disintegrity’ on a few webpages.) Researchers ought to be honest – honestly informing participants of the purpose of research, honestly using the data collected, honestly presenting the findings. Honesty refers to one’s attitude when performing an action, and more than that.

A check on Oxford English Dictionary yields more insights about the word ‘honesty’. It is related to the Middle French word honnesté, meaning ‘virtue, honour, integrity’. Coming to think of that, the word ‘honest’ does sound related to the word ‘honour’, which denotes much more than truthfulness. An honest person in this sense is not only candid, but also respectable and honourable for being virtuous. Academic honesty then means more than ‘not lying’ – it speaks of the importance of maintaining the honour of the academia, the communal esteem shared by people in the academic community.

Integrity
Yet some other institutions would adopt the term academic integrity. This is the term I like the most, perhaps partly because it is one of the five core values of QC boys (Note: my alma mater, Queen’s College). I’m quite proud that my secondary school celebrates integrity as an important value. But what exactly does this word mean?

According to Oxford English Dictionary (again), ‘integrity’ is the ‘soundness of moral principle; the character of uncorrupted virtue, esp. in relation to truth and fair dealing; uprightness, honesty, sincerity’. From the OED definitions we can clearly see that the concepts of honesty and integrity are inter-related, each constituting the other.

Cambridge Dictionary Online defines ‘sb’s artistic, professional, etc. integrity’ as ‘someone’s high artistic standards or standards of doing their job, and that person’s determination not to lower those standards‘ (my emphasis). Here integrity has the meaning of unyielding consistency and adherence to certain standards. Perhaps different people have different artistic standards, but when it comes to academic integrity, it refers to a set of agreed standards which everyone entering the established community must not compromise, as the impact otherwise will not be individual but collective.

The word ‘integrity’ has one additional layer of meaning when referring to objects, and that is ‘the condition of not being marred or violated; unimparied or uncorrupted condition; original perfect state; soundness’. The soundness of the academia as a whole can be marred and corrupted by individual acts of impropriety, and this points to the seriousness of academic dishonesty. Once corrupted, it is difficult – at least takes great effort – to make intact again. (I’m not innocent enough to believe that the academia is intact without any corruption now, but one must hope for an ideal if one believes in the value of the system.)

This is why we should take academic dishonesty seriously. If we allow people to obtain an academic degree using problematic data, or if we allow dishonest researchers to publish inaccurate findings, we are allowing corruption of the system from within, not only tarnishing the reputation and credibility of individual institutes, but also compromising the honour and integrity of the entire intellectual community.

This September I’m officially unemployed. Quitting a job that granted me stable income and careers prospect to pursue a PhD in a foreign country was a difficult decision which some might deem unwise. Voices, internal and external, have been warning me against such a decision.

‘You could stay and earn enough to buy a flat soon!’

‘It’s a shame to give up what you’ve established here. You could have good prospect if you stay.’

‘There’s no guarantee that you can earn as much as you do now after your PhD.’

I well understand that these are all true. Yet, I’m proud, with a mix of anxiety and excitement, to have made this decision, leaving the path of certainty and taking the one less travelled by, with the hope of seeing scenery unavailable to me previously.

This blog will be a record of my footprints on this new path, sharing my new life and thoughts as a PhD student in Glasgow.

Ten more days before I physically embark on the journey… Should start packing soon.